NASA’s Parker Solar Probe has arrived in Florida to begin final preparations for its launch to the Sun, scheduled for July 31, 2018.

In the middle of the night on April 2, the spacecraft was driven from NASA’s Goddard Space Flight Center in Greenbelt, Maryland, to nearby Joint Base Andrews in Maryland. From there, it was flown by the United States Air Force’s 436th Airlift Wing to Space Coast Regional Airport in Titusville, Florida, where it arrived at 10:40 a.m. EDT. It was then transported a short distance to Astrotech Space Operations, also in Titusville, where it will continue testing, and eventually undergo final assembly and mating to the third stage of the Delta IV Heavy launch vehicle. 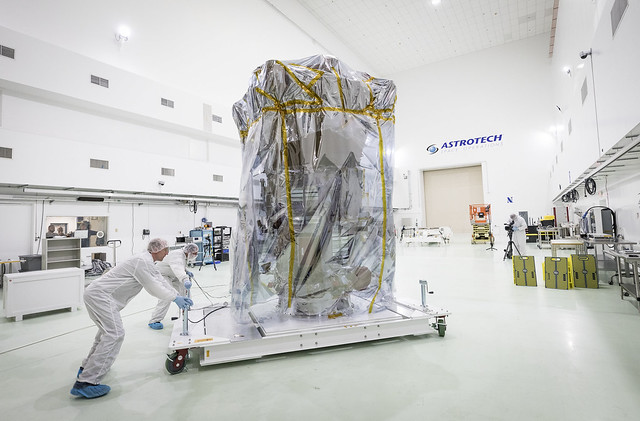 Parker Solar Probe is humanity’s first mission to the Sun. After launch, it will orbit directly through the solar atmosphere — the corona — closer to the surface than any human-made object has ever gone. While facing brutal heat and radiation, the mission will reveal fundamental science behind what drives the solar wind, the constant outpouring of material from the Sun that shapes planetary atmospheres and affects space weather near Earth.

“Parker Solar Probe and the team received a smooth ride from the Air Force C-17 crew from the 436th,” said Andy Driesman, Parker Solar Probe project manager from the Johns Hopkins Applied Physics Laboratory in Laurel, Maryland. “This is the second most important flight Parker Solar Probe will make, and we’re excited to be safely in Florida and continuing pre-launch work on the spacecraft.”

At Astrotech, Parker Solar Probe was taken to a clean room and removed from its protective shipping container on Wednesday, April 4. The spacecraft then began a series of tests to verify that it had safely made the journey to Florida. For the next several months, the spacecraft will undergo comprehensive testing; just prior to being fueled, one of the most critical elements of the spacecraft, the thermal protection system (TPS), or heat shield, will be installed. The TPS is the breakthrough technology that will allow Parker Solar Probe to survive the temperatures in the Sun’s corona, just 3.8 million miles from the surface of our star.

“There are many milestones to come for Parker Solar Probe and the amazing team of men and women who have worked so diligently to make this mission a reality,” said Driesman. “The installation of the TPS will be our final major step before encapsulation and integration onto the launch vehicle.”

Parker Solar Probe will be launched from Launch Complex-37 at NASA’s Kennedy Space Center, Florida. The two-hour launch window opens at approximately 4 a.m. EDT on July 31, 2018, and is repeated each day (at slightly earlier times) through August 19.

Throughout its seven-year mission, Parker Solar Probe will explore the Sun’s outer atmosphere and make critical observations to answer decades-old questions about the physics of stars. Its data will also be useful in improving forecasts of major eruptions on the Sun and the subsequent space weather events that impact technology on Earth, as well as satellites and astronauts in space. The mission is named for University of Chicago Professor Emeritus Eugene N. Parker, whose profound insights into solar physics and processes have guided the discipline. It is the first NASA mission named for a living individual.

Parker Solar Probe is part of NASA’s Living With a Star Program to explore aspects of the connected Sun-Earth system that directly affect life and society. Living With a Star is managed by the agency’s Goddard Space Flight Center in Greenbelt, Maryland, for NASA’s Science Mission Directorate in Washington. Johns Hopkins APL designed, built and manages the mission for NASA. Instrument teams are led by researchers from the University of California, Berkeley; the University of Michigan in Ann Arbor; Naval Research Laboratory in Washington, D.C.; Princeton University in New Jersey; and the Smithsonian Astrophysics Observatory in Cambridge, Massachusetts.

The Applied Physics Laboratory, a not-for-profit division of The Johns Hopkins University, meets critical national challenges through the innovative application of science and technology. For more information, visit www.jhuapl.edu.